Afraid of dogs? Here is how one educator repurposed her fear of dogs into a successful educational program

A rewarding outcome of the Mutt-i-grees Curriculum is seeing children overcome their fear of dogs and cats once they begin participating in the Mutt-i-grees Curriculum. An outcome we often overlook is an adult’s triumph over their fear of animals. Chiara Grenaway, Education Coordinator for the Baychester Library in Bronx, NY, grew up with a fear of dogs and spent all of her childhood and much of her adult life never having physical contact with a dog. That is, until the Mutt-i-grees team came to her library in the summer of 2016.

During a Mutt-i-grees Library professional development held in Greenwich Village, a couple of adorable, friendly Mutt-i-gree puppies accompanied the team and met the many librarians present.

Chiara was anxious, and admitted to having been fearful of the dogs. With a little encouragement, she gently held one of the puppies in her lap and within minutes went from refusing to touch a dog to the team having to pry the little pup out of her arms! The drastic change Chiara experienced prompted her to try to find a way to incorporate dogs as part of the implementation of the Mutt-i-grees Curriculum.

Since then Chiara’s support of the Mutt-i-grees Curriculum has been unwavering. She has used the Curriculum as the basis for the New York Public Library’s Enrichment Zone in her branch. 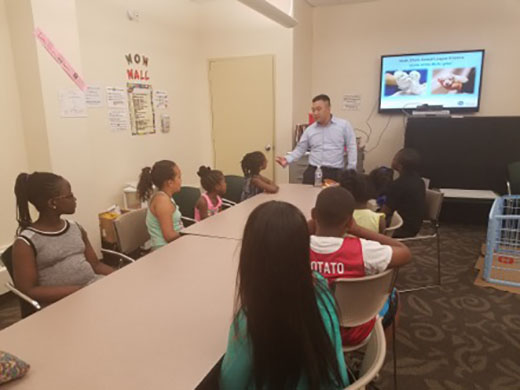 The Enrichment Zone is an after-school program structured around helping students with homework, providing tutoring in Common Core subjects, and supporting kids in using the library’s various resources. The Enrichment Zone is designed not only to instill confidence in children, who may be struggling with a subject in class, but also to improve their self-esteem and build strong, proud young adults. This could not align better with the Mutt-i-grees Curriculum’s focus on social and emotional learning as well as humane education.

Recently, Chiara had us visit the Baychester Library and to her surprise, we brought an active husky puppy. She has come to enjoy the company of relatively mellow dogs, but was still a little wary of greeting a dog with bountiful energy. Despite her doubts, Chiara approached the pup and instantly fell in love. She shared her newfound confidence with students at the library who were also shy upon first meeting the little shelter pup. By the end of the visit, the children were grinning ear to ear and had learned an important lesson in overcoming fears.

Chiara has made such a turnaround in her views on dogs that she now hopes to adopt a shelter pet of her very own in the near future! She has been a true testament to the difference the Mutt-i-grees Curriculum can make not only to children, but their teachers as well. 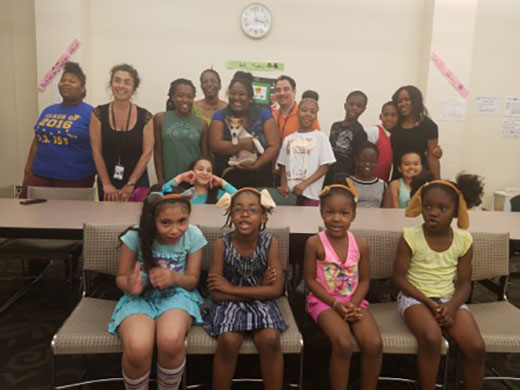