Last year at this time, 12-year-old Ian Burleson was struggling with almost everything, especially school. Ian has autism spectrum disorder, and like many people with this challenge, he’s subject to meltdowns. Various things can prompt a meltdown, including change and unpredictability. Since Ian was about to make the transition from elementary to middle school — a major change with loads of unpredictability — there was cause for concern. Then a Mutt-i-gree entered the picture, and everything changed.

“I introduced her to all the students,” said Harris Principal Michael Tountaskis. “I said she is just a baby and we’ll raise her together. I explained that she belongs to all of us, and that we all have to show responsibility by raising her right.”

Ruby is a sweet, well-socialized dog who loves kids, despite her rough start. Last May, she and her two littermates were among 40 dogs rescued from a squalid hoarding situation. Michael happened to be at the shelter on the day that Ruby’s foster mother returned the three puppies, healthy and ready for adoption. 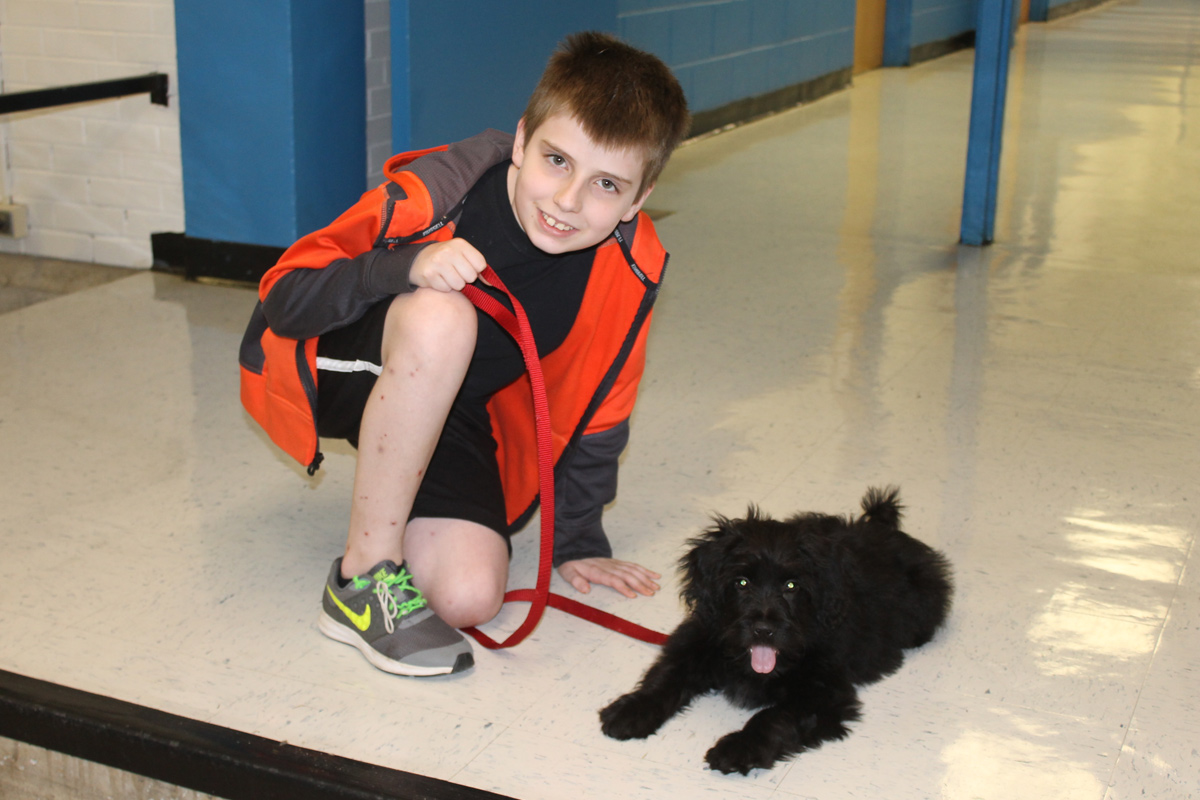 Holding Ruby in his arms that day, Michael realized that she would make a fantastic school dog. One thing led to another, and dog-lover Sandy Vaughan, the school’s administrative assistant, adopted Ruby on the condition that she bring the pup to school every day.

Not long into the schoolyear, Ian had a meltdown. “Their first interaction was incredible,” said Michael. “Ian already loved animals, so he was open to Ruby from the start. He quickly calmed down and offered her a cracker. He pet her gently on the top of her head. We all high-fived each other. That’s how amazing it was.”

Regan Mimken, Harris’s Exceptional Child Instructor, is equally awed by the change in Ian. “In the past, it was quite difficult to reduce his anxieties and bring him back into a learning state,” she said. “But this year is different — all because of Ruby being there to provide comfort and meet sensory needs.”

Now when Ian feels anxious, he requests time with Ruby. Within minutes of being near her, he’s more relaxed. Frustrations dissipate and meltdowns de-escalate. And the amount of time it takes to bring him back to a place where he is ready to learn is cut in half. “It’s been a semester of breakthroughs,” said Michael.

All of Harris Middle School’s 264 students love Ruby. A quick pet or nuzzle in the hall between classes creates a sense of community and has a calming influence on everyone. For Ian, the relationship brings special benefits. Ruby’s nonjudgmental presence has boosted his self-confidence so much that he helps staff walk Ruby to various classrooms, telling his schoolmates how to interact with her and what her body language is saying. “He is stepping out of his comfort zone,” says Michael. “He’s looking people in the eyes and becoming much more social than he’s ever been.”

Ruby has also changed the way Ian deals with faculty. “Not long ago, I was busy at my computer and Ian was in the next room interacting with Ruby,” said Michael. “All at once, he was standing in the doorway. He said, ‘Mr.. T., have a good weekend. I’ll see you on Monday.’ This might not seem like much, but to those of us who know Ian, it was shocking.”

Harris Middle School will be the first school in North Carolina to implement the Curriculum, which it plans to phase in during the next few months. When Ian’s teachers heard about the Mutt-i-grees Ambassador program they agreed that Ian would be an excellent candidate.